As many noticed, the image was a fake, the real image was from the August 2017 Big3 championship game.

Recently both rappers have been in the headlines for supporting Trump. Cube faced backlash after he revealed he would work for Trump’s campaign for their Platinum Plan for Black people in America.

Cube tweeted, “I mean, it’s politics. Both sides are taking advantage of whatever little piece of information they think could swing something,” he said. “So it’s like, has Biden taken credit for everybody that’s running out to vote for [him]? So who knows? They doing it. That’s politics. Not concerned with those games.”

50 Cent recently received backlash as well, for seeming to endorse Trump and expressing how he felt about the proposed tax increase for top earners under Joe Biden.

On his Instagram was a screenshot highlighting the top tax rates by state under Biden’s tax plan, along with this caption. “WHAT THE FUCK! (VOTE ForTRUMP) IM OUT, FUCK NEW YORK The KNICKS never win anyway. I don’t care Trump doesn’t like black people 62% are you out of ya fucking mind.”

Ice Cube was the only one to respond to the fake image that Eric Trump posted, saying “N**** Please.” 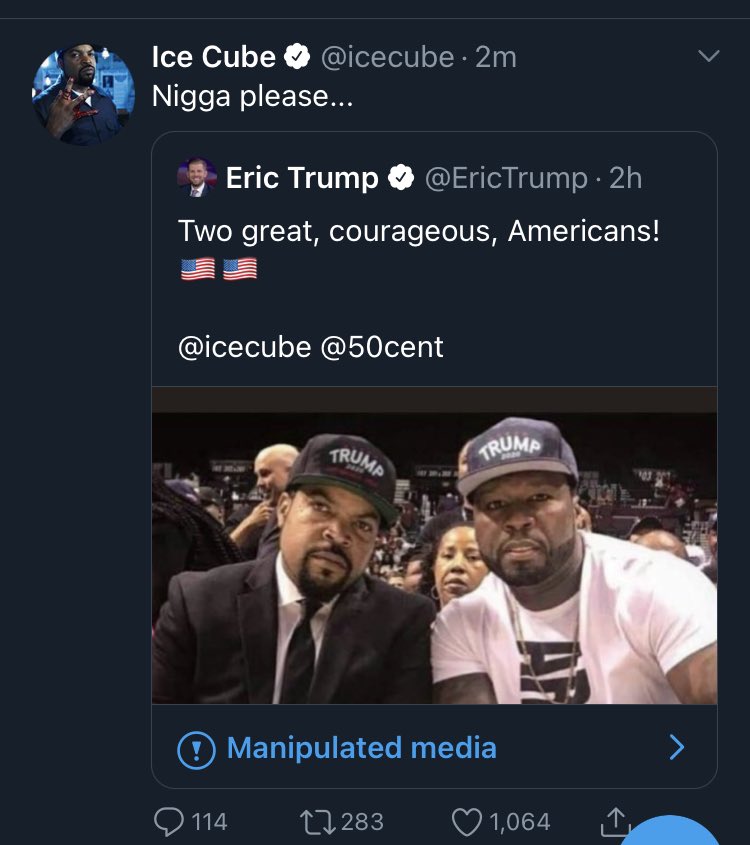 Previous Rush Limbaugh Has Terminal Lung Cancer
Next Texas Woman Died On A Flight, She Had Covid-19

Steve Harvey Approves of Michael B Jordan Dating Lori Harvey “I Like This One. I Still Got My Eye On Him”

Salt-N-Pepa Says They Were Already Established Before Spinderella, She Was An Addition To “What Was Already Created”

In an interview with “The Breakfast’s Club,” Salt N Pepa chatted with DJ Envy about …